“The park keeper spotted me,” the girl says, hurtling to a stop with brakes screeching, “if he catches me one more time he’ll ban me”.

She’s only knee-high to a grasshopper but feisty. There’s no cycling in the park but she does it anyway. I feign disapproval.

Being banned from the park would have been the least of my worries at her age but I keep that to myself, “men rode penny-farthings through the park on Sundays when I was a nipper”.

She gives me an old-fashioned look, eyebrows raised in disbelief as we pull identical paper bags from our pockets and shake monkey-nut cocoons onto our palms.

This park has been the backdrop to my life – fishing in the ponds, courting Jessie, pushing Christine on the swings. The manicured lawns, the squirrels, even the lines of bedding plants have stayed the same. But the people, my people, have changed. Gone.

The crumple of paper bags attracts two cocky grey squirrels. They hang from a nearby oak with back legs unnaturally long and bodies stretched. Above their backs dandelion-seed tails twitch in anticipation. The smaller of the two descends to sit on its haunches in front of the girl. Then it springs.

Crampon-claws prick their way up her yellow-check trousers making it to first base on her shoulder. I see her head tilt slightly as she tries to feel its fur with her cheek but it’s already belly-crawling along her arm, and stretching for nuts. She studies it, as if inspecting every hair, whisker and claw, while it stuffs nuts into bulging grey cheeks. 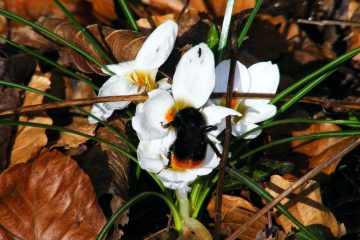